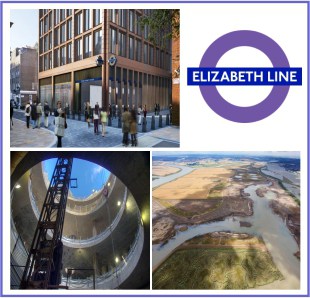 Crossrail, the ‘Elizabeth line’ (or indeed Lizzie line, as it has already been nicknamed), opens to passengers in 2018 , when it will increase London’s rail-based transport network by 10% and cut journey times across the city. Crossrail is expected to bring an additional 1.5m people to within a 45-minute commute of Central London and, according to The New West End Company, the West End can expect a £2.5bn boost by 2020 as a result of thousands more visitors with annual turnover for retailers predicted to hit £11.25bn two years after completion of the project, compared with £8.8bn today. Commercial Property in the Neighbourhood It has been estimated commercial office values around Crossrail stations in Central London will increase over the next 10 years, with an uplift of 10% in capital value above an already rising baseline projection. Office rents in locations close to the new stations have already been rising – a case in point being the area around Farringdon Station where prime rents have risen from £35-40 psf to £70+ psf in the last three years. Whilst, we are not anticipating such increases to occur around Bond Street, where rental levels are already very high, we do expect to see an increase around Tottenham Court Road. A number of new developments, including Rathbone Square and 70 New Oxford Street, coupled with new public spaces around Tottenham Court Road, will certainly bring a new focus and greater appeal for what will be a hugely improved part of the West End. Despite tenants currently seeking to reduce their footprints in order to keep operating costs at a minimum, rents are still predicted to rise by an average of 13% by mid-2017. However, in these uncertain times there will undoubtedly be a trend towards more flexible leases, with businesses not wishing to make long-term expenditure commitments. With this in mind, serviced offices and co-working spaces will continue to be an attractive option for smaller businesses and start-ups. For larger operations, it is 2017 when we will see a number of the new larger central London developments come on to the market, providing much needed vacant stock. West End Access to Crossrail Our local access to the Elizabeth line will be at Bond Street, where the station is getting two new ticket halls at street level (Davies Street and Hanover Square), new public spaces and new mixed-use buildings above both halls, or, at Tottenham Court Road – where the station has seen an even bigger overhaul and will stretch from a new plaza in front of Centrepoint, towards Dean Street, running below Soho Square. The ticket hall will be six times the original size and works by Turner Prize winning artists will feature. Elizabeth line services from both stations will commence in December 2018, when a train every two and half minutes will run in each direction terminating at Paddington in the west and Abbey Wood in the east. The route fully opens in December 2019 when services will run right through to Heathrow and Reading (west) and Shenfield (east). Estimated journey times from Bond Street include: 3 minutes to Paddington; 34 minutes to Heathrow T4, 52 minutes to Reading, 13 minutes to Canary Wharf and 48 minutes to Shenfield. Did you know . . . Three million tons of excavated material from the Crossrail project has been shipped to Wallasea Island in Essex to create an RSPB flagship wetland nature reserve, which will be twice the size of the City of London as well as being one of the UK’s most innovative flood defence systems. Are you looking for new business premises? Do you want to reduce your space needs, or, are you a growing business? Do you want to extend your lease? If you would like a chat about these, or any other options relating to your commercial property needs, please give us a call: Phil Richards MRICS on 020 7629 1533 or email philrichards@astonrose.co.uk